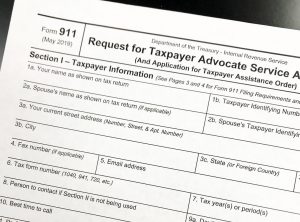 Do you have an IRS issue and you can’t seem to get it resolved?  You’re not alone.

Back in the day, if you had an IRS issue it was fairly straightforward how to communicate with them. Calling, writing a letter or making an appointment at the local IRS office.

You could call the IRS and, after a reasonable wait time, talk to a human being.  This was an effective way to deal with the pending issue as quickly as possible. Calling now is the biggest waste of time.  You will call, be on hold for a period of time and then, you guessed it…be hung up on.  That is totally awesome.

Writing a letter was also effective. You could outline the facts and circumstances and state your case.  Although clearly it’s not as fast as making a phone call, the response time was generally acceptable. Writing a letter now is the second biggest waste of time. I guess it’s marginally better that being hung up on however.

3. Make an Appointment at the Local IRS Office

Although we did not do this very often, it was also effective when we did do it. Although you do need to go the local office, meeting face to face can really move the issue along quickly. Many of the local IRS offices closed due to the Pandemic so this was really not an option.

The PANDEMIC. Boy, has it changed everything.  Particularly when dealing with the IRS.

The Pandemic sent many employees home on the Work from Home (WFH) model. This of course included the IRS employees. Now, some employees are slowly making their way back to the office.

The IRS had about 76,000 full time equivalent employees at the end of 2020.  This is about 20% less than 2010.  Granted, over time, technology improvements generally make the operations more efficient.  With that said, that sure is a big drop in employment over the decade.

Think of the IRS as the Government Sales and Accounts Receivable Departments.  What business cuts these departments? Sorry, I forgot…this is the Federal Government.  In one respect however the IRS is very fortunate.  The U.S. Postal System makes the IRS look like the shining star of the Government.

Between the Pandemic and less staff the IRS is…um, err, ah… in arrears.  As of September, 2021, the IRS had a backlog of 2020 tax returns down to about 10 million. Yes… that’s down. Oh and there’s an additional 5.7 million returns that need more information from taxpayers before the returns can be processed.

One of the big benefits of the form is that it is only two pages.  Page 1 is completed by the taxpayer and Page 2 is completed by the IRS.  Who knew they could make the form this short and straightforward? Oh, and yes, there are also two pages of instructions for a two page form. The quickest method to file IRS Form 911 is via fax.

Who is Eligible to Submit Form 911?

We certainly hope that your IRS issue is not causing you financial difficultly and / or an immediate threat of adverse action.  Having said that, we have many clients who just have not gotten any response from the IRS.

So, what’s not eligible to be submitted on IRS Form 911? All of the pedestrian run of the mill matters you can think of:

“How do I get my IRS transcript?”

You get the idea. Only submit the Form 911 if you are eligible.

We just recently started using IRS Form 911. A new client hired us to help him get an income tax penalty abated.  His prior CPA did not file his partnership income tax return on time.  This resulted in a $2,400 late filing penalty. Ouch. The good news is that there is an IRS Revenue Procedure for eligible small partnerships to automatically get this penalty abated.  We wrote to the IRS several times outlining our case. There was no response. Once the IRS threatened to levy the client’s assets, we filed Form 911. About two weeks later we got a call from the Taxpayer Advocate.  OK, the response to filing Form 911 is not as quick as calling 911.  But it was a response.  They put temporarily stopped the collection actions on the account and said they would call back in 30 days.  That’s progress!

Another new client had an alleged balance due from several years ago.  We filed Form 911 and a week later got a call from the Taxpayer Advocate. Again, they put a hold on the account and said they would call back in 30 days. Yeah!

If, unfortunately, you have a pending IRS issue that is not getting resolved, see if you are eligible to file IRS Form 911.   If you are, fax it to the Taxpayer Advocate as soon as possible.