Home › Tax News › Why the Fiscal Cliff is Fiscally Irresponsible

Why the Fiscal Cliff is Fiscally Irresponsible 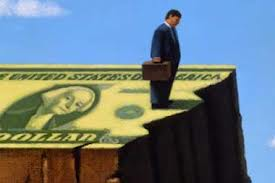 The Federal Government and the country are set to go off the Fiscal Cliff on New Year’s Day.

The term Fiscal Cliff refers to number of laws that if they remain unchanged, could result in significant tax increases and spending cuts.

Former President George Bush had put in tax cuts (“Bush Era Tax Cuts”) that are set to expire at the end of 2012. Among the tax cuts set to expire, here are some key ones.

The highest ordinary income tax will increase from 35% to 39.6%.

The tax on qualified dividends will increase from 15% to your ordinary income tax bracket up to 39.6%.

The phase out of personal exemptions and itemized deductions for upper incomes.

The decrease in the federal estate tax exclusion from $5.12 million to $1 million.

Additionally, the Affordable Care Act legislation has assessed a Medicare Surtax of 3.8% on passive income for married couples with income over $250,000.

Finally, the ‘payroll tax cut’, which temporarily decreased the employees Social Security Tax from 6.2% to 4.2% will revert back to 6.2%.

These tax increases are expected to generate about $530 billion of revenue for the government.

All of these tax increases will leave taxpayers with less disposable income.

With less disposable income, there is less money to spend.

With less money to spend, the economy will slow down as the consumer accounts for about two-thirds of the Gross Domestic Product (GDP).

Due to the inability of Congress to get anything done, they previously decided on across-the-board-spending-cuts to many discretionary programs as they couldn’t make the cuts themselves. Programs like Social Security, Veterans Pensions and Federal Pensions would be exempt from these cuts. These spending cuts are expected to be about $136 billion.

With both of these forces arriving at the same time, if nothing is done, the good news is that the deficit is projected to be cut in half. The bad news is that there is the possibility this would push the country into recession.

Politics aside, both sides of the aisle will need to get together to hammer out a deal as soon as possible to reduce the deficit and avoid a recession.

What do you think about the Fiscal Cliff?

Please leave your comments below.